The Lord Warden and Admiral of the Cinque Ports and Constable of Dover Castle was once one of the most powerful officials in the Kingdom.

The need to organise the defences of the Kent and Sussex coast assumed a new importance when the Crown lost control of Normandy in 1204. Local customs collectors were initially given the added role of Custodes or Keepers, responsible for naval defences within their respective districts.

Sometimes, during the first half of the 13th century, the Constable of Dover Castle was also appointed Keeper of parts of the South-East coast, but this was not always the case.

During the Second Barons War (1264-67), when Henry III looked to France for help in quelling the rebellion, it became apparent that, unless command of land and naval forces was unified, one might neutralise the other.
Thus, from the appointment of Stephen de Pencestre in 1268, the offices of Constable of Dover Castle and Lord Warden of the Cinque Ports were invariably held by the same person. A complete list of officeholders from 1150 can seen here.

The Lord Warden was appointed by the Sovereign but, on taking office, took an oath before the representatives of the Ports to uphold their ancient privileges; a tradition which continues to the present day.

This dual allegiance is probably the main reason why this ancient office, one of the oldest in the country, has survived for 800 years. If the position had been that of a royal governor imposed upon the Ports, it would probably have fostered opposition and strengthened their own organisation and leadership. Had the Warden been chosen and appointed by the Ports themselves, it would have encouraged his and their independence and presented a threat to royal authority. As it was, the power and prestige of Lord Wardens developed from their unique standing between the Crown and the Ports.

The Lord Warden as Admiral

The Lord Warden’s role as Admiral of the Cinque Ports developed from about the middle of the 14th century. Originally all findals (flotsam and jetsam) belonged to the Crown but, from Saxon times onwards, royal charters granted rights over wreck and findals to the Cinque Ports.

By the 13th century, not content with claiming legitimate wreck and findals, the lawless Portsmen sometimes resorted to piracy in order to boost their spoils. Amongst the victims were merchants from overseas and inevitably the King was forced to intervene, as a matter of foreign policy. Laws were enacted restricting the circumstances in which wreck could be claimed and inquests were held into disputed claims.
Within the area of the Cinque Ports, it was usually the Lord Warden who was commissioned to conduct these proceedings. The Lord Warden was also called upon to try allegations of piracy and assault at sea; to marshal the ship service of the Ports and to punish deserters: functions usually exercised by the admirals responsible for the discipline of the fleet.

Thus it was, by the middle of the 14th century, that Lord Wardens claimed and were recognised as holding the office of Admiral. This received statutory recognition in 1389-91, when other local admirals lost their legal jurisdiction to the High Court of Admiralty in London, but an exception was made for the Cinque Ports.

Increasingly, the Lord Warden shared in the Ports’ right to the proceeds of wreck and findals and the substantial profits probably encouraged his interest in the administration of maritime law. Over time, the Lord Warden became generally responsible for maintaining law and order on land and at sea within the area of his jurisdiction; for controlling the passage of goods and people at sea and for regulating the local fishing industry.

Unlike Wardens in the north of England, the Lord Warden of the Cinque Ports never became an hereditary office. In the early days, Lord Wardens were men of only slightly greater social status than the officials of the Ports themselves. Between the 14th and 16th centuries however, their influence and the potential to profit from the role meant that the position was increasingly sought after by members of the nobility.

In 1409 and 1493 the Princes of Wales who later acceded to the throne as Henry V and Henry VIII respectively, were appointed Lord Warden. During the Commonwealth (1649-1660) which followed the English Civil War, the office of Lord Warden was not filled as such, but the role was exercised jointly, in commission, by Admiral Robert Blake and others. 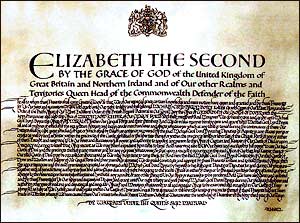 Today, Lord Wardens are appointed by the Queen on the advice of the Prime Minister.

They are appointed by Letters Patent bearing the Great Seal.

The office is currently held by Admiral of the Fleet the Lord Boyce KG GCB OBE DL who was appointed in 2004, the only naval officer to have occupied the position apart from Admiral Robert Blake during the 17th century.

Born in 1943, Lord Boyce was educated at Hurstpierpoint College and the Britannia Royal Naval College, Dartmouth. He joined the Royal Navy in 1961 and rose to the position of First Sea Lord and Chief of the Naval Staff.
He served as Chief of the Defence Staff and Aide-de-Camp to H.M. the Queen from February, 2001 until his retirement in 2003. He was created a Life Peer and now sits as a cross-bench member of the House of Lords.

Lord Boyce was formally installed in office, in April 2005, at a session of the Grand Court of Shepway held on the site of the ancient Priory of St Martin, in the grounds of Dover College.

Since 1708, Walmer Castle near Deal has been the official residence of the Lord Wardens, probably due to the poor state of repair, at that time, of the former lodgings in Dover Castle.

WalmerCastle was built in 1539, as one of a chain of artillery forts to guard against a Spanish invasion. During the last 300 years, successive Lord Wardens modified the castle to turn in into a more comfortable home, but the last resident Lord Warden was the Marquess of Willingdon ((1936-41). Today the castle and gardens are managed by English Heritage. They are open to the general public and there are many, fascinating reminders of its illustrious tenants. 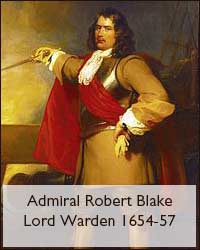 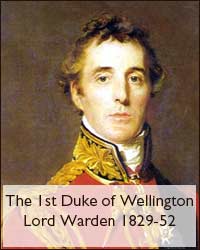 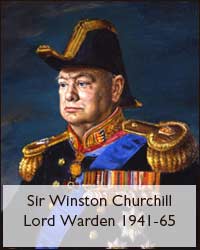 During the last 300 years, the office has often been bestowed on Prime Ministers and distinguished wartime leaders, including William Pitt the Younger (1792), the Duke of Wellington (1829), Lord Palmerston (1861) and Sir Winston Churchill (1941). The only woman ever to have held the office was Her Majesty Queen Elizabeth the Queen Mother (1978-2002).